A fire in the Johnson Automotive Technology Center that occurred in the early morning hours of March 27 has destroyed one vehicle and caused extensive damage to nearby equipment, as well as the upper level of the building itself. No one was injured as a result.

The blaze was caused by a battery charger left running overnight, which overheated and set fire to a Nissan Altima. The car was totally destroyed in the fire. Before the flames could be extinguished, they melted nearby equipment including a mobile computer station, and caused extensive smoke damage.

The fire appears to have started overnight while the building was unoccupied, though it is not clear who was responsible for leaving the charger running.
When we visited the scene of the fire on March 28, the acrid smell of melted rubber and plastic hung heavy in the air. Cleanup efforts are underway, but it may be several more weeks before the space is cleared for use. Additional repairs may be necessary this summer. In the meantime, classes are proceeding in the lower level of the building, and automotive instructors are continuing to review safety protocols with students. The total cost of cleanup and repair is not yet known, but Dean of Students Tiffanie Bentley says it is estimated to be around $400,000. The fire is still under investigation.

Pictured: The charred remains of the Nissan Altima sit in the Automotive Technology Center awaiting a post mortem analysis to find the cause of the destruction. Photos by Troy Hudson. 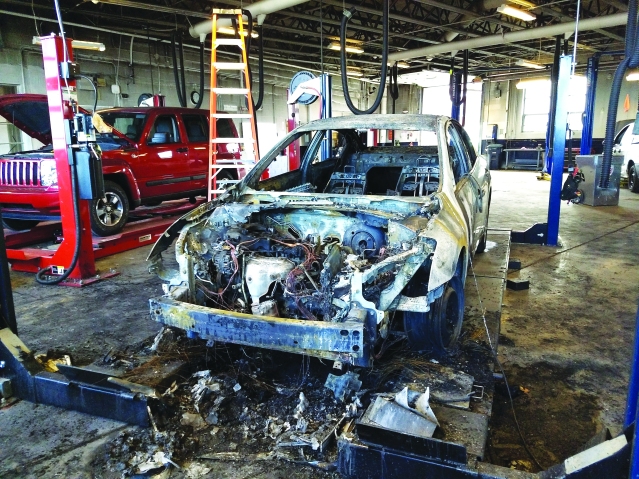