Chasing the Dead in Ireland 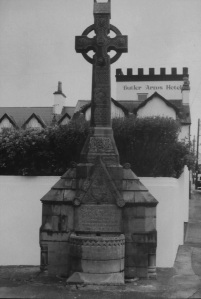 The Butler Arms Hotel in County Kerry, Ireland, owned by the author’s family since 1916. Photo by Randall Delaware.

My grandmother, who lived in Derry, New Hampshire, asked me, I think, in late summer of 1984, after I returned from a summer in Europe, “Did you visit Ireland?” I said “No.” And then this woman of 96 years old said, “I suppose everyone I know is dead now anyway.” I felt bad that I didn’t visit my grandmother’s hometown and that I hadn’t any information from relatives to bring to her.

About 2001 or 2002, I received Irish citizenship, and I wanted to learn more about my grandmother’s Ireland. I contacted an American cousin living in Massachusetts, who was the granddaughter of my grandmother’s sister. She was raised Catholic, her grandfather’s religion, yet didn’t know her grandmother was originally Protestant. Her grandmother was baptized through the “Church of Ireland” back in County Kerry in Munster Province in Ireland. This sparked some curiosity, because my grandmother said people “got along.” So I read several books on Ireland, and I learned a lot. This I’ll share with you.

In the late 1500s and early 1600s the English organized two settlements in Ireland. The best known is the Ulster Settlement in Northern Ireland. The settlement in the south, in what is now the Republic of Ireland, was the Munster Settlement. The Ulster settlement rewarded loyalists to England with land. This land, which was confiscated after war, was taken from the wealthy native Irish and the Catholic Church. The land division and grants were given out in roughly three equal amounts between English settlers, Scots settlers and native Irish. The Irish portions was mostly granted in 3,000-acre lots, while the English portions was mostly granted in 2,000-acre lots, and the Scottish portions in mostly-1,000 acre lots, thus giving land to a larger number of Scots. The book “The Plantation of Ulster” by Philip Robinson, a historical geography, gave me greater insight into the history of Northern Ireland.

The Munster Settlement was not easily settled, because many an Englishman didn’t want to venture into Ireland and southwest Ireland was certainly “beyond the pale.” That expression may cause some confusion to the unfamiliar, but just think of “pale” as a protective fence keeping dangerous people outside. At one time anything outside of Dublin was considered “beyond the pale.”

What England resorted to was to send the Palatines, German Protestants from the Rhineland escaping continued war; the Huguenots, French Protestants who fled France for England and other Protestant countries to avoid torture, imprisonment and death for practicing a different religion; and former British soldiers, granted land for military service. Michael MacCarthy-Morrough has written a fine account of this settlement in “The Munster Plantation: English Migration to Southern Ireland, 1583-1641.”

So how did my Protestant ancestors get along with their Catholic co-inhabitants? There were some difficulties, but nothing of the scale and duration of Northern Ireland, which another branch of my family left in the 1700s to move to Maine. These settlers did not own the land that they farmed, because some powerful men in London received the land grants and leased the land to settlers. Typically, these landowners never left England. The settlers not only paid to use the land but also had to pay a tithe or tax on the bounty from their rented land.

My grandmother grew up in County Kerry, although it was County Limerick where the Palatines and others first settled. It’s County Kerry that I want to write about. Perhaps you have heard of the “Ring of Kerry”? Well, that’s the area. The Catholics and Protestants on this western coast got along okay. There was one skirmish, which left one Protestant dead, as told to me by my Irish-born cousin, who, like me, has a Catholic mother and a Protestant father, and is descended from another of my grandmother’s sisters.

When I first met Cousin George, a fellow hobby genealogist, and a Trinity College Dublin graduate with a history degree, he brought me to his parents’ home, where his mother, not a fan of genealogy, admonished us: “Stop Chasing the Dead!”

But anyhow, let me continue. County Kerry was where Daniel O’Connell, the first Irish Catholic Minister of Parliament in London representing Ireland, was born. The O’Connell home is about 10 miles down the road from my grandmother’s birthplace. Daniel O’Connell’s family had a relative, whose family was native Irish but Protestant by choice, which allowed many privileges. O’Connell’s family was wealthy, and very interesting. O’Connell’s uncle, “the Colonel,” was one of the “Wild Geese” who fought for the French in France, a country that England wanted to prevent from getting a foothold in Ireland. “The Last Colonel of the Irish Brigade,” by Morgan John O’Connell, provides a better understanding of this leader of the “Wild Geese.”

Additionally, the O’Connells were smugglers. Cognac was one such item smuggled in, and this Catholic family didn’t hesitate to sell their goods to wealthy Protestants, who had a taste for French spirits. County Kerry also had its small share of Catholic/Protestant weddings. Which church the mother, father and kids went to just depended on the family. One such arrangement was the mother and children going to the Catholic Church and the father going to the Protestant Church. The book “Daniel O’Connell: Nationalism Without Violence,” by Raymond Morley, gives a wonderful description on life in Ireland in the early 1800s.
Life in the early 1900s was different, and many an American of Irish ancestry knows of U2’s song “Bloody Sunday” about the war in Ireland. So what happened in County Kerry? Well, World War I broke out in 1914, and many Irish Protestant and Irish Catholic sons fought in the Great War against Germany. But also during this time period the Anglo-Irish War broke out, which was followed in the early 1920s by the Irish Civil War, which had the IRA fighting the IRA, disagreeing over the division of Ireland into two countries. American-born Eamon de Valera would survive the Civil War, and Michael Collins would die in an ambush. These were two of the great figures in the Irish Civil War. Collins was sent by de Valera to negotiate with the British and was blamed for the division of Ireland into two parts.

What gave rise to Britain’s willingness to grant independence to the 26 counties in Ireland was Germany’s powerful onslaught in France, which required as much manpower as Britain could get. The British, not needing to prolong a big war in Ireland, offered independence if helped by the Irish against Germany.

Anyhow, my grandmother’s uncle, who was a Protestant in Waterville, County Kerry, bought the Butler Arms Hotel in 1916, which is still owned by the family to this day. To buy a hotel during the Anglo-Irish War says something about my family’s relations with Catholics in this area. When my great grandmother died in the 1920s, her obituary noted that the procession was large due to the numerous Catholics attending my great grandmother’s funeral. She was well liked.

The Bay View Hotel in Waterville was also owned by another relative, but was recently sold to purchase another in Killarney, County Kerry. But, if you ever go to Waterville, you’ll see a statue of the actor Charlie Chaplin (1889-1977), whose hotel of choice, during his summer vacations, was the Butler Arms Hotel. Waterville is a nice little village on the southwest coast of Ireland, with a nearby golf course. In nearby Caherciveen, which has three spellings and where my grandmother called her childhood home, there is an Englishman named Mr. Cooke, who will take you trap shooting for a fee. He is married to an Irish woman, whom he followed back to Ireland. There are some excellent restaurants nearby; at one, the bartender and wait staff advertise Mr. Cooke’s shotgun shooting business.

Another book, which reads a little like a textbook, but which gives readers a good understanding of the development of labor unions in Ireland, is “The Trade Union Pint: The Unlikely Union of Guinness and the Larkins” by Martin Duffy. The Guinness family, an Irish Protestant family, established the Guinness Brewery in Dublin, Ireland. The company had always been one of the highest paying companies in Ireland. But, although they continued to be the best paying company in Ireland, they failed to keep sharing their increased wealth with the workers until Jim Larkin Jr. and the Workers Union of Ireland (WUI) persuaded Guinness to change. Jim Larkin Jr. was able to improve working conditions and introduce methods of communication that aided Guinness by allowing feedback from the lowest level of workers to the top level of workers. This turned out to be a win-win situation.

My last visit to Ireland was a couple of years ago. I was able to travel the country quite cheaply by bus. If you have a liking for history or are into genealogy, you’ll find much of interest in Ireland. Dublin is a great starting location. If visiting cemeteries and taking photographs is your thing, then a car or bus or train will get you there.

Dublin is where the National Archives are held, which possesses the 1901 and 1911 census records. Listed are my grandmother and my great grandparents. My great-grandparents are listed as speaking both English and Irish (or Gaelic, the Latin term).

I hope I provided you with books to read and a better understanding of lesser-known facts. If you ever visit Ireland, the drinking age is 18, so have a pint of Guinness or Baileys Original Irish Cream.