The Scene on the Pitch: Both Squads Gear Up for YSCC Championships

The Lady SeaWolves had a great few weeks, crushing each of their three games. After a 2-0 victory at University of Maine- Machias on Saturday the 13th, and a 3-0 victory against CMCC on Tuesday the 16th, the Lady ‘Wolves found themselves on another hot streak. The win in Machias marked a milestone for the Lady SeaWolves, as it was the first time they have won there. They had some real momentum heading into their match with Unity College this past Saturday. As Saturday was Senior Day, that only added fuel to the their fire. They were unstoppable!

After recognizing their seniors and thanking them for all their hard work, the Lady ‘Wolves got to work. Unity could not get ahold of the ball while our Lady ‘Wolves dominated the first few minutes, keeping the ball away from their net and keeping the pressure on until sophomore Callie O’Brien could capitalize with a great shot sailing over the goal keeper’s head.

The SeaWolves didn’t let up, forcing Unity to play a completely defensive game. Unity started to fight back until freshman Ashley Atwater sniped a shot from half field, scoring her first goal with SMCC. The rest of the half was calm, with Unity pushing back against the dominant force on the field but unable to capitalize.

The second half was like a chess match, players running back and forth trying to figure out how to break through the opposing defense. It wasn’t until the very end of the game, with two minutes on the clock that O’Brien caught the back of the net again with the help of junior Jessica Haskell. This crushing 3-0 shut-out pushed our Lady ‘Wolves to an 11-1 record while Unity stands in the dust with four wins and ten loses.

The SeaWolves will be traveling to Concord, New Hampshire, this coming Saturday (the 27th) to face off against Machias once again, this time in a YSCC semifinal match.

The men SeaWolves team, while not as dominating as the Lady ‘Wolves, have had none-the-less an impressive few games. On the 13th they wiped out Machias with a crushing 6-1 victory. Five days later, on Thursday the 18th, they battled it out against CMCC. The game ended with two goose eggs on the big board as neither team could ruffle the back of the net.

The men’s match on Saturday was an entertaining one. The first half of the match was exciting but uneventful. Neither team was able to score, despite SMCC’s eight and Unity’s six shots on goal. Freshman goalkeeper Camden Lebrecque continued to display his dominance on the field, not only saving each shot fired his way, but also protecting the net from a dirty penalty kick.

The second half was slow rolling at first, but the SeaWolves got into their groove, quickly scoring three goals within five minutes. Sophomore Yaroslav Philbrook started it off with two stingers that ripped right into the net. Sophomore and defenceman Stephen Brady soared on a free kick into the back of Unity’s goal not 60 seconds later for his first goal of the season. The last 25 minutes were hard fought, but all too similar to the first half, with no more goals scored.

Again, Lebrecque was dominant in the goal box, saving eight shots this game, which brings his total to 104 saves this season resulting in a staggering .819 percentage. This victory sent our SeaWolves to a 6-5-3 record as Unity’s record fell to 5-9 record.

The men SeaWolves team will also travel to Concord on Saturday the 27th for a YSCC semi-final match with NHTI.

The Beacon wishes both squads the best in the tournament. 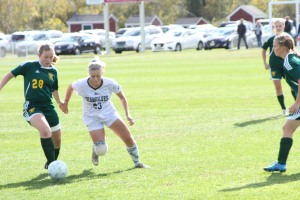 Emily Harris looks to strip the ball away from Unity’s Bailey Holland. Harris also got three shots off, with two being on goal.

Yaya Dunn fights to get control of the ball and advance it up field in Saturday’s action against Unity College. Dunn got three shots off, two of which were on goal. Photo by SMCC Athletics and Cassie-Briana Marceau