SeaWolves Looking Strong as Season Comes to an End

By the Beacon Staff
As the 2018-19 Yankee Small College Conference regular season winds down, the SeaWolves basketball squads have positioned themselves to have a deep run into the YSCC postseason play. Since the last Beacon the SeaWolves women and men’s teams have compiled an 11-1 record.

This weekend the teams traveled to Newport Rhode Island to take on Navy Prep in a non-conference matchup. Unfortunately, both teams would fall to Navy Prep as the Lady Wolves would be unable to overcome a low-scoring first half and fall 57-46. The Men Wolves would fall by six, 58-52.
Both coaches took the loss in stride as men’s head coach Matt Richards stated, “Although it wasn’t the result we hope for, it’s always an enjoyable road trip for our programs. Wonderful people, gracious hosts, and student-athletes who intend to represent our country.”
Women’s Head Coach Katie Bergeron spoke about the last week and a half while touching on what lies ahead for her squad. “This is a talented and disciplined Navy Prep team. After six games in 11 days and the starting five having to give us big minutes in the previous two, we did our best to keep pace on the offensive end. Now our focus turns to the challenge ahead in CMCC.”
That’s right SMCC basketball fans, the Central Maine Community College Mustangs will be here tomorrow night for what some describe as “the best small college basketball rivalry in Maine.” The ladies are set to tip off at 6 p.m. with the men following at 8 p.m. Needless to say, if there is one game that fills the stands it’s the SMCC-CMCC game.
Let’s get back to the last two weeks, as there’s plenty of basketball to cover with limited space. 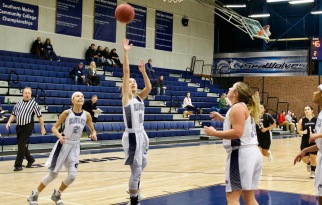 On Jan. 26, the SeaWolves men’s team took to the court against Central Penn College in a showdown between the nationally ranked teams. SMCC came into the game ranked sixth, while the Knights of Central Penn were ranked fifth. The contest between two Division Two USCAA teams proved to be one that would not disappoint any basketball fan as it would take overtime for the SeaWolves to earn the win.
After 20 minutes of play the SeaWolves would take a 42-39 lead behind the scoring of Ryan Cloutier (11 points), Atencio Martin (10 points) and Jacobee Burpee (9 points).
The second half saw the SeaWolves build their largest lead of the game to 11 points (65-54) with 8:51 remaining courtesy an Atencio Martin three-point shot. The Knights would respond by draining the next 9 points before the SeaWolves could respond with another three-point shot from Jacobee Burpee (68-63) with 5:37 remaining.
In the final minutes of the game, SMCC would be outscored six to nine, leveling the score at 74 and setting up overtime. The most dramatic moment of the game would come with less than a minute to go when Burpee would drain a three-point shot with 34 seconds remaining, giving SMCC a short-lived lead of 74-71.
Central Penn would have an answer when Trent Watson leveled the score at 74 with 16 seconds remaining.

EMILY EMERSON GOES IN FOR AN UNCONTESTED LAYUP AGAINST
HAMPSHIRE COLLEGE. EMERSON FINISHED WITH 7 POINTS.

SMCC had a chance to win in the final seconds as Gregory Trinidad’s shot would not find the bottom of the net sending the game into overtime.
The Wolves would control overtime from the first possession as Atencio Martin would start the Wolves scoring from the foul line, sinking both shots (76-74). A little more than a minute later Ryan Cloutier would drain both from the foul line, padding SMCC’s lead to four (78-74).

Central Penn would grab their only point of the overtime on a foul shot with two minutes remaining (78-75), after which Anderson Kavutse dropped three foul shots, Atencio Martin completed a three-point play after being fouled in the act of shooting. Ryan Cloutier would round out the scoring for the Wolves with a patented Cloutier dunk.
Sophomore point guard Jacobee Burpee had a breakout game, scoring 20 points and hitting five out of six from three-point land.

SMCC POINT GUARD, JACOBEE BURPEE GETS OFF AN UNCONTESTED LAYUP AGAINST
CENTRAL PENN. BURPEE WOULD FINISH THE GAME WITH

Burpee would also dish out nine assists. Senior captain Ryan Cloutier recorded his fifth performance of 20 points or better on 11-21 shooting, as Atencio Martin would also break the double digits with 18 points.
After the contest Coach Richards tweeted, “What a game. Intense from start to finish. Multiple lead changes. A great small college basketball game.”
On the women’s side of the court, the Lady Wolves head into the final few games of the regular season looking to finish strong, setting up a healthy run in the YSCC postseason tournament that lands them in the championship game and hopefully cutting down the nets in Auburn.
Last Thursday the Lady SeaWolves took on the Lynx from New Hampshire Technical Institute in a YSCC matchup.
SMCC would grab the lead with an Amanda Brett layup, after which Emily Hogan would drain two three-point shots in a row for a short-lived four-point lead (8-4). Amanda Brett would take over the rest of the opening quarter, hitting for 13 points and grabbing five rebounds; SMCC would have a 3 point lead after 10 minutes of play (22-19).
The Lady Wolves would continue to build their lead in the second quarter as Brett continued to pace the SeaWolves, scoring with 8 points. The Wolves would hold a nine-point lead (40-31) at intermission.
NHTI would see the Wolves’ lead build in the third quarter when they were outscored 14-13. Trailing by only 10 going into the third quarter, the Lynx ran out of gas only being able to score five-points in the final 10 minutes of play.
Again, Amanda Brett would be the lead scorer on the SMCC squad, hitting for nine-points greatly aiding the Wolves to a 75-49 win in the Hutchinson Union Building.
After 40-minutes of play, Brett finished with a career-high 40 points on 17-33 shooting from the field. She also grabbed 13 rebounds and made four blocked shots in 34 minutes of game-time play.
Junior guard Emily Hogan rattled off her first double-double of the season with 10 points and a career high 14 rebounds. Sophomore captain Abigail Ramirez hit for 13 points and nine assists, which inches her closer to second place on the career assist list.
As the 2018-19 YSCC basketball season winds down, don’t forget, SeaWolves faithful: CMCC comes to SMCC tomorrow night. The regular home season ends on the 10th, with the ladies taking on Springfield Technical Community College at 2 and the men taking on Williamson at noon.