Magic on the Diamond

By the Beacon Sports Staff

There are moments in the sports world in which the diehard sports fan needs to take pause and contemplate what just transpired. In the world of baseball, the no-hitter is such a moment — in fact, to call it a moment is an oversimplification.

A week ago yesterday, Dylan Francoeur was handed the ball to take to the mound and pitch against Carleton College in a non-conference game on SMCC’s South Portland campus.

Francoeur would face 25 batters, allowing four base runners on three walk and hit batsman, and walk off the mound with a no-hitter at the end of a seven-inning game.

The no-hitter would be Francoeur’s fifth win of the season and his eight start. Francoeur, who is a right-hander, recorded four strike-outs while lowering his ERA to 1.36, which is a United States Collegiate Athletic Association (USCAA) best. 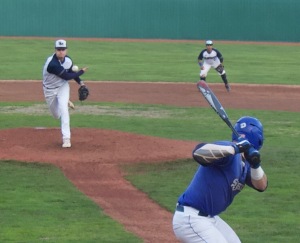 Above: Dylan Francoeur in action against the College of St. Joseph’s of Vermont in the YSCC final. PhotoS: BEACON STAFF

Francoeur got plenty of help from the SeaWolves’ bats when Stefan Lesco smacked a two-run homer in the top of the first inning. Lesco would collect a run batted in, while Peter Stauber would gain base by drawing a walk.

The Wolves would activate the 10-run rule in the seventh inning when Caleb Burpee drove a fastball into the alley in right-center field, clearing the bases of the two SeaWolves who occupied first and third base. Burpee would collect his 18th and 19th runs batted in for the season.

Head Coach Walsh summed up the Wolves’ win by complimenting their catcher, Peter Stauber, who, he said, “called a great game behind the plate.”

“This lineup can produce runs in different ways, Walsh said. “Today we did it with the long ball.”