by the Beacon Sports Staff

This past Saturday, the Lady and Men SeaWolves soccer teams traveled to Concord New
Hampshire to start their quest to the Yankee Small College Conference finals. At the end of the day, both squads secured victories. The Lady SeaWolves took to the pitch first to play Paul Smith’s College, the men faced Unity College in the second set of semi-final games.

Sunday’s finals were cancelled due to the weather being uncooperative and the championship games were relocated to Wainwright Recreational Complex. The Lady SeaWolves played on Monday and the Men SeaWolves play this afternoon at 3pm. As the Beacon goes to print on Sunday, we were not able to cover these games in this issue. Look for coverage in the next Beacon.

While Southern Maine was battling it out against Paul Smith’s and Unity, the Central Maine Community College squads were taking to the pitch against New Hampshire Technical Institute.

On the men’s side of the field the SeaWolves squad entered the tournament as the top seeded team, followed by NHTI as the second seeded team, then CMCC and rounding out the fields was Unity.

The final four on the women’s side of the tournament draw placed NHTI as the first seed,
followed by SMCC, CMCC and Paul Smith’s.

Katelin Bennet gets off a baseline passing shot
against Paul Smith’s College.

Paul Smith’s would keep the Wolves off of the score board until the 68th minute when Callie O’Brien beat the Paul Smith’s goalie with a well-placed shot into the left corner of the net. O’Brien would have to fight off a Paul Smith’s defender and thread a seem down the middle of the field before getting her shot off from 12 yards away.

The goal would hold for the rest of the game sending SMCC to Sunday’s YSCC finals.

As play unfolded against Paul Smith’s College, the Central Maine Mustangs were setting the stage for a third match against the SeaWolves for both squads. The Lady Mustangs would upset the NHTI squad with a one-nil victory on the Lynx’s home field. The win for the Mustang’s punched their ticket to their first ever YSCC Championship game.

The SeaWolf men unleash an offensive blitz on Unity in SMCC’s second game of the day. The Wolves would get off 63 shots and limit Unity to nine. The first half saw SMCC get 37 of their shots off keeping the Unity defense and goal keeping busy. 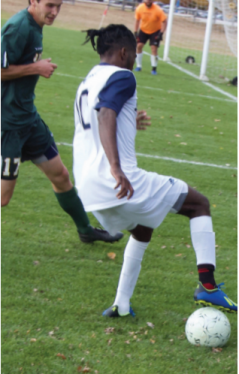 Keto
Tchiputo displays skills right before getting
off a baseline passing shot.

Give and goes, (passing to a teammate, breaking for the net and having the ball returned to you) and passes into open slots (which have the intention of freeing a man for a shot on goal), were a solid staple of SMCC’s offensive attack.

Within a span of a minute and three seconds, SMCC’s Joel Musese would net all three of the SeaWolves goals. Musese’s first goal would come at the 65:32 mark, his second 29 seconds later, his third at the 66:35 mark.

Action around the Unity net was hot and heavy, as Sam Napper Unity’s goalkeeper turned away 32, out of 35 shots on goal. Joshua Nagle took to the net for SMCC and had a quieter day having only to turn away 5 shots on goal.

Headed into the championship games Monday and Tuesday, the SeaWolf squads have won all of their games against Central Maine. The Lady Wolves have posted 2-nil and 3-nil scores. The men posted 3-2 and 1-nil scores both of which took double-overtime periods to resolve.

Needless to say, Monday and Tuesday games, most likely were, will be worth attending. If you attended Monday’s game excellent. If you are reading this and you want to support SeaWolves soccer, then head over to Wainwright Recreational Complex and be a part of  SeaWolf excitement.

Speaking of SeaWolf excitement, the women’s and men’s basketball squads have started their 2019-20 seasons. The Lady Wolves are home on October 30th to take to the court against Maine Maritime Academy and the 2nd to play Navy Prep. The men’s team is home on November 2nd and 5th for games against Navy Prep and Ben Franklin Institute of Technology.