by The Beacon Sports Staff

Hello basketball fans, or how about: hello SMCC SeaWolf basketball fans.
The 2019-20 season has gotten off to a great start for the SeaWolves squads and from what this sports reporter has seen on the courts, there’s plenty of reasons to believe that this season could be one that will not disappoint.

Since the last Beacon, both teams have won all of four of their games. Last Thursday, Unity College took to the Hutchinson gymnasium court with the women open the evening play with a loop-sided 77-21 win. The men finished the evening’s play with a 106-46 win over the visiting Rams.

Two days prior the Wolves traveled to Augusta to take on the University of Maine Augusta Moose. The women would post a 14point win (69-55), as the men finished their nights work with an 18point win (75-57).

The four-game stint started back on the 13th when the teams travel to Portsmouth, New
Hampshire to battle it out against Great Bay Community College. The Lady Wolves would walk off the court posting their highest point total to date 103, while holding the GBCC Herons to just 13 points. The men’s game proved to be a bit more competitive as the Herons would only fall to the SeaWolves by 10 (66-56).

All of this brings us to, “The Game of the Last 2 Weeks,” the Vermont Technical College
Knights versus your Seawolves. Both games proved to be highly competitive as the Lady Knights would give the Lady SeaWolves all they had and then some. On the men’s side of the court, Vermont Tech started out the contest by building an 11point lead (20-9) in the opening minutes. What is obvious about both squads is that the teams play with a level of energy that is up tempo while maintaining a sense of purpose: accessing offensive possibilities and sustaining a definitive defensive presence. What makes all of this sweeter to watch is that both teams are young.

Grace Fontaine, Ajia Andrews and Tara Flanders, all first-year starters, lead the way in the opening quarter of the Vermont Tech game as they scored 17 of the SeaWolves 18 points. Flanders and Andrews would hit for six-points apiece as Fontaine would hit for three.

The Wolves would hold a four-point lead after ten-minutes of play (18-14). Vermont Tech would outscore the Wolves in the second 27-25 cutting the SeaWolf lead to two-points after 20 minutes of play. Flanders and senior Amanda Brett would provide the majority of the offensive as they would drain the basket for four and 12points respectively. Reserve players Elise Hebert and Ainsley Bryant would come off of the bench and add three and six-points helping the SeaWolves offensive cause.

The teams would battle it out in the third quarter scoring 17 apiece as neither team could put any distance between them and their opponent. Again, it was Brett (8 pts) and Andrews and Flanders (3 pts each) who lead the SeaWolves offensively.

Over the next five-minutes the Wolves would build a 10point lead on the scoring of Brett (6 pts) and Fontaine’s three-pointer. Vermont Tech’s Kimah Stribling would hit a three-pointer cutting the Wolves lead to seven, after which the Wolves would build their largest lead of the game (11 pts, 74-63) with 3:29 left to play. It would only take the Knights 25 seconds to cut the Wolves lead to five with 3:04 remaining. The last three-minutes of the game saw the Knights cut away at the SeaWolves lead over and
over again, pushing the ball up court and looking to score as quickly as possible.
With 11 seconds remaining the Knights pulled within two-points (82-80) hoping to upset the SeaWolves on their home court.

This would not be the case, as Amanda Brett would hit three of five free throws to seal the win for the Seawolves. Head Coach Katie Stannard shared her thoughts regarding the game stating, “A hard fought game by both sides, we did well to run methodical offensive sets to combat their athleticism on the defensive end. We were a bit careless with the basketball today evident in our turnover count but capitalized on shooting opportunities. Augusta on the road will be another true test.” As noted above, The Lady Wolves would outlast the Lady Moose.

The men SeaWolves would work their way back from the early 11 point deficit and eventually knot the score at 32 apiece. Sophomore guard, Ian Regan would tie the game with a three-point shot with 3:53 left in the first half. Regan would start the comeback with a two-point jumper followed by a layup. Cameron Cousins and Pedro Fonseca would add a free throw and three-point bucket to trim the 11 point lead to three.

Vermont Tech’s Xavier Hicks and Jeremiah Shaw would connect on consecutive three-point shots padding the Knights lead to nine. Again, it would be Fonseca who jumped started the Wolves comeback with a three-pointer trimming the Knight’s lead to six (26-20).

The teams would trade baskets over the span of the next two-minutes at which point Clay Hardy hit a three-point shot to cut the Knight’s lead to three at the 5:28 mark (30-27). SeaWolf first year center, Cameron Cousins would cut the three-point lead to one with layup.

The Knights would pad the lead out to three again setting up Regan’s momentum shifting three-pointer. The Wolves would outscore the Knight’s in the final minutes of the half nine to four behind the play of Anthony Labor (2 pts), Ian Regan (3 pts) and Clay Hardy (6 pts) to go into halftime sporting a seven-point lead (43-36).

The SeaWolves would maintain the lead for the remaining 20-minutes behind the play of their guards. Clay Hardy would start the half by connecting for the first four SeaWolf points. Hardy would end the half with 11-points. Fellow first-year guard Fonesca contributed 8 points draining back to back threes with less than five-minutes of play remaining which kept the SeaWolves lead at ten.

After. 40-minutes of play the Wolves utilized points-off-of-turnovers (19 pts) and 24-points from the reserve players. Hardy led all scorers with 24 points, while grabbing 10 rebounds and picking the Knight’s pocket twice. Fonseca would add 17 points and Regan tallied 12 points on 5-8 shooting.

Head Coach Matt Richards commented, “This was a nice result to get in front of our home crowd—proving to our guys that we can play with any team on our floor. We used fresh bodies to run an offense designed to cause fatigue for the opposition on the defensive end and did well to make stops down the stretch to keep a distance that proved insurmountable by Vermont Tech.” 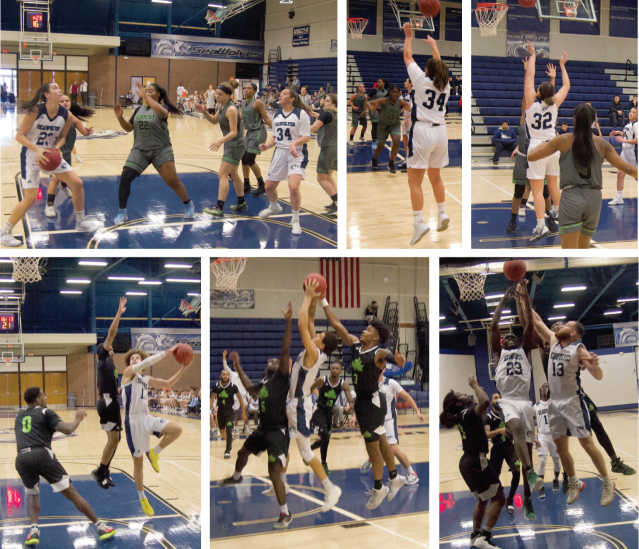 From top left to bottom right: SeaWolves’ Elise Herbert,
Tara Flanders and Amanda Brett in action against
Vermont Tech. Herbert contributed 7pts and grabbed 6
rebounds, while Flanders ended the contest with 17pts and
6 rebounds. Senior Amanda Brett would end the day with
34pts and 13 rebounds. Zachary dives to the basket against
Vermont Tech, as DeSean Cromwell fights for a rebound
and Anthony labor and Tyler Mickle pound it out under
the boards against Vermont Tech.