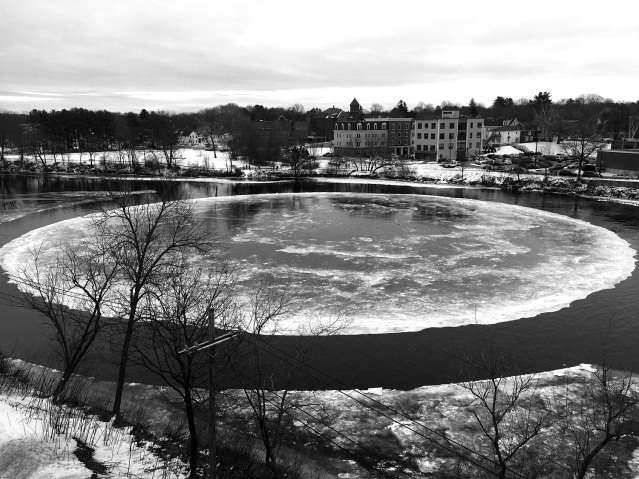 By The Beacon Staff

Ice circles are thin and circular slabs of ice that rotate slowly in the water, most often the rotation is caused by the push from a current. It is believed that they form in eddy currents. It has been shown that existing ice discs can maintain their rotation due to melting.

An unusual natural phenomenon, ice disks occur in slow moving water in cold climates and can vary in size, with circles more than 15 meters (49 ft) in diameter observed.Ice Circle of Vana-Vigala in Estonia is reported to have had a diameter of over 20 meters, whilst one approximately 298 feet (91 meters) in diameter appeared in Westbrook, Maine in January 2019.

This cool looking spinning ice formation right here in Westbrook, Maine has generated a few conspiracy theories of alien invasions, suggesting that the end of days are now upon us. Locals are showing up in the Portland suburb like tourists.

An article on Patch reported that “The city hilariously egged on the speculation with a post on Facebook that said “it looks like the moon has landed in Westbrook” and included video footage from a drone camera. People loved it, commenting that the enormous just adds to the charm of the city of 17,500 and brought worldwide attention to it.”