by the Beacon Sports Staff

The SeaWolves baseball team has started off the 2019-20 Yankee Small College Conference season in grand fashion. While the Wolves have only dropped two out of the 13 games, they have played (one of the loses was in an exhibition game against Holyoke Community College), the Wolves have plated 99 runs while their opponents have scored 44 runs.

Since the last Beacon, the Wolves have collected 7 wins while dropping two. The two weeks started off by sweep- ing Central Maine Community College on the 17th, 9-3 and 9-2. The Wolves then dropped a game against Bridgton Academy 16-5 on the 18th and rebounded on the 21st with wins against Great Bay Community College 12-0 and New Hampshire Technical Institute 13-3 before dropping the final game of the day to Holyoke Community College 6-1. The Wolves started their current win streak on the 22nd, besting GBCC 12-3 and CMCC 5-1 on the 22nd. A few days later, the Wolves would best CMCC again as the Wolves belted out 10 runs while allowing 2 runs.

Heading into Sunday’s games against American International College, a Division II team in Springfield, MA, head coach Dave Walsh commented, “Any phase of our game can win a ball game for us. Whether we need a pick-me-up from our offense, a big play from the defense, or a dominant inning from our bullpen, we are getting it. This weekend will be a good test for our guys—getting exposure to NCAA division 2 baseball.”

The SeaWolves bats would start the scoring in the bottom of the second, when Jayco Pena drove in two SeaWolf base runners with a single. The fourth inning would prove to be a breakout inning for the Wolves as they would score five runs. After a strike out by Hayden O’Donnell, Cory Gunter would reach first base on an error by the CM shortstop and advance to second on a passed ball.

Jayco Pena would single to centerfield, advancing Gunter to third and bringing Peter Stauber to the plate.

Stauber’s single drove Gunter across the plate and advanced Pena to second.

Joshua Paisley would also gain first base via a walk, pushing Pena across the plate and keeping the bases loaded.

Juan Subervi would single to the shortstop who erred on a throw to third base allowing two more SeaWolves to cross the plate as Miller and Stauber scored padding the Wolves lead by five runs (7-2). The Wolves would plate three more runs in the fifth, seventh and eighth innings build a 10-2 lead.

Beacon shout outs to Jayco Pena going 4-4 at bat and sophomore captain Peter Stauber for a 2-3 day, collecting two Runs Batted In and scoring one himself and to Juan Subervi for driving in his 15th and 16th RBIs of the fall. 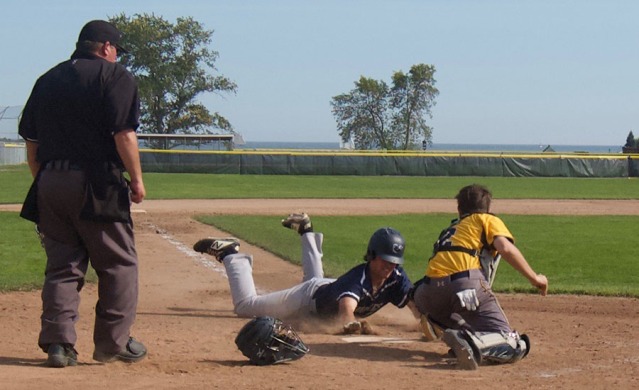 Peter Strauber slides in before the tag is made against Great Bay Community College. In 11 games Stauber is batting .375 with 20 runs and 6 RBIs.