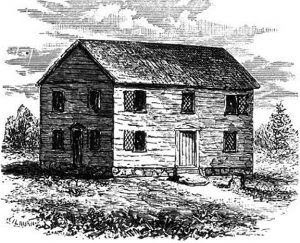 Daniel Andrews built the church that people were accusing people of being witches. This is a painting of the church. Cited by: https://historyofmassachusetts.org/reverend-samuel-parris

I have been called a witch before but I never actually thought I was related to one. Let me explain. I just recently found out that my cousin, Susan Polumbo, has been doing genealogical research on something that her father started and a cousin started on her father’s side. On my father’s mother’s side, we go way back to Salem, Massachusetts. She really didn’t know anything at the time, as the church burned down in Salem, so all of the records she needed to make that connection to our family tree were gone. But my cousin found a photocopied page of the family Bible in The New England Historical and Genealogical Society in Boston, which revealed information about the family she was researching.

Polumbo and a group of friends helping with the search learned about Daniel Andrews who was charged with being a witch. And to my surprise, Andrews is my 8th great grandfather!

Polumbo shared with me a lot of information about how Andrews and our family tree grew together.

She was trying to find out who Andrew’s parents were when she discovered these four pages from the Good Book. That’s where she found Andrew’s parents, who were Lydia Parker and Daniel Andrews.

“I believe the Bible that I found—those pages—came down through Lydia Andrews or Nehemiah’s sister, Nehemiah’s daughter, and on through her family,” said Polumbo. The search continued from there, and she found out everything about Daniel Andrews. This provided the background for how he came to Salem and what his career there entailed.

“He was born in Watertown, Massachusetts and he did not have any stature,” Polumbo explained. “You could tell because when people had stature, they were called by Mr. or Mrs. and in some parts, Daniel was called Mr. Daniel Andrews. Other parts, he was called just Daniel. But he came in as a carpenter mason and was hired to build the church in Salem Village. It doesn’t stand anymore now but he did build this other house that is now a tourist center because it was one of the houses where they interrogated people accused of being witches.”

Andrews was a selectman in Salem Village and Salem Town. He was considered an outsider because he stood up for Rebecca Nurse, his sister, who was also accused of being a witch. During her trial, he acted as her character witness, according to Polumbo.

“But then, he and several other people were accused of being witches as well. At the time, Daniel knew that the arrest warrant had been issued so he and this other fellow and his wife fled. I don’t know if Sarah went with Daniel or not,” Polumbo said. “That was his wife, but it did say that they went and hid out for a while.”

Andrews’ accusation and arrest warrant was issued when the hysteria started to subside. The townspeople started to accuse the governor’s wife, Mary, of being a witch. At that point, when things got personal, the governor, Sir Williams Philip, quickly quelled the mob.

“The governor had (initially) set up this court to hear the cases… but finally he just shut everything down because it wasn’t going the way he imagined it would go,” said Polumbo, who assumed that Andrews, at that point, moved away because she didn’t find anything else about that part of the story.

“In this book that I’m reading now, it’s interesting because it talks about how the same thing happened in North Hampton, Massachusetts. It was like a couple years later, and Jonathan Edwards, who you heard about in English Literature classes, was their minister,” Polumbo said. “Instead of looking at it like ‘Oh my gosh! They’re possessed!” he looked at it as if they were bringing the word of God. So he kind of snuffed out any thought of it being witchcraft. He said  what they were really was the spirit moving through them.”

Although a distant relative, researching Daniel Andrews brought me closer to him and his life during those wicked times.

He was a very smart man who saw what was happening, and he knew he had to get out of  Salem. So there you have it: I’m a witch, or at least part-witch So you better be careful: I could put a spell on you!