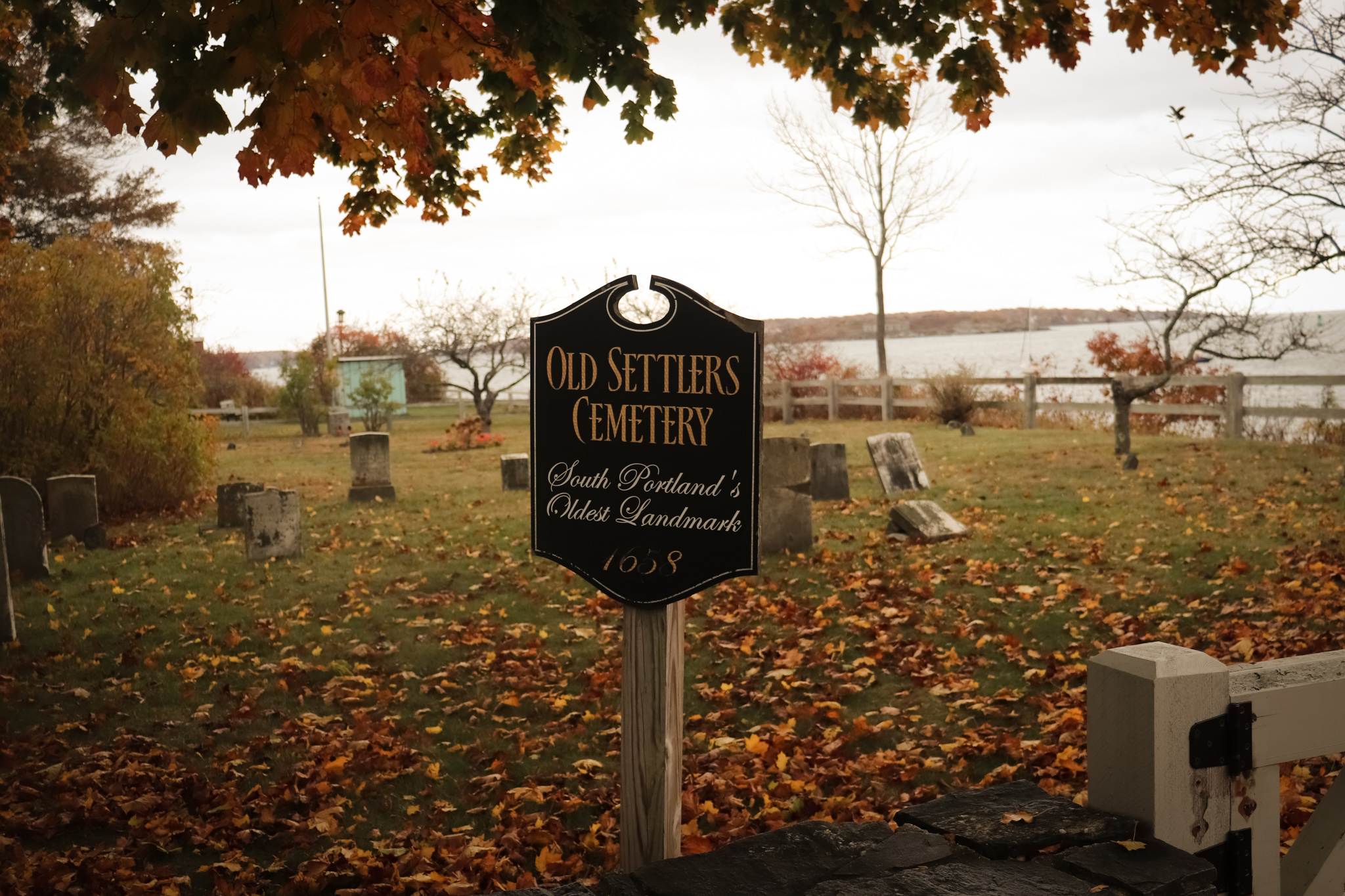 Southern Maine Community College is known to be the cheapest college in Maine, with the ocean right next to it, but the campus actually is filled with historical landmarks such as The Old Settler’s Cemetery, also known as the Thrasher Cemetery; the oldest public known burial ground in South Portland. The cemetery has been around since 1658 and was the burial ground for soldiers from the Portland Harbor Forts, such as Fort Preble, Fort Scammell, Fort McKinley, and Fort Gorges. The Thrasher Cemetery is also the final burial site for the Thrasher family, though there are over 30 graves with unknown names and relations. The Thrashers owned much of  the land around Willard Beach, the family then sold the land to the US Government, the land on which Portland Head Light stands.  Most of the gravestones are white marble which were hauled up from the beach surrounding the campus and cemetery. Then, flash forwards in the 1950s,  Ft. Preble closed as a US military installation after World War Two. The government decided to move the US military burials and place them in Long Island, New York.

Research and documents show that roughly 50 sites were removed, most of these graves were many people of foreign heritage, Herb Adams, a connoisseur and historian on the subject, says “there were many foreign-born who spent their life in the army, wives, and children of soldiers stationed at Ft. Preble, several suicides, and many folks who died of ” acute alcohol poisoning ” — meaning they drank the wrong bootleg stuff or just too much of the right stuff.” Nonetheless, these people have a hard-knock life back then, and as many know, back then famine, disease, and war took the lives of many.

Ebenezer Thrasher was a delegate who helped draft the Maine State Constitution in 1819 he and about seven other Thrashers were buried there giving it the nickname Thrasher Cemetery. Among the seven known Thrashers at the cemetery is Civil War soldier Charles G. Thrasher of the 13th Maine Infantry, he served under Col. Neal Dow of Portland, the famous founder of the anti-alcohol Prohibition movement that swept the U.S. in the 19th Century. The Thrashers are direct descendants of Myles Standish, and John Alden, prominent men who came to the “New World” on the Mayflower. Standish, and Alden both had very important roles in the Plymouth Colony. According to The Maine Historical Society. Standish’s son married Alden’s daughter and their 6th generation descendant married Ebenezer Thrasher.

A gravestone that leaves a mysteriousnous to it is Mrs. Ann Simonton which is all it says on the weathered slate stone. There are some records that show Simonton to have died in April, 1744, this would make her stone the oldest still in existence at the cemitary. She was born in 1675 Argyle shire, Scotland under the name Ann Douglas. Ann Douglas married Andrew Simonton in 1695 and they had 7 children. Andrew Simonton and his brother moved to Irland in 1705 and then to Famlouth in 1718. Ann Simonton and the children then moved to Falmouth around 1727. In that time period Cape Elizabeth, South Portland, and Falmouth were all considered Falmouth and Maine was still the Province of Massachusetts Bay.

Some of the names on the stones have worn away or sunk beneath the ground over the years and some have even been moved. A letter from the US Government explains how the first serviceman to be buried at The Old Settlers Cemetery was on November 22, 1870 and over time 21 more servicemen and their family members were buried there. In September 1917 the remains of the 22 were moved to Fort McKinley Post Cemetery which later on closed in 1952. They were then moved again to Long Island National Cemetery.

The legacy of these families expands to many other families in the Greater Portland area such as the Crabtrees and Dyers. One of the daughters of the Ebenzer Thrasher, Mary Thrasher married Reuban Dyer, Dyer served as private, in 1758, during the American Revoulationary War under Captain John Libby’s Company and  Colonel Jedidiah Preble’s regiment. Sadly, Reuban died, and she re-married priveteer, Agreen Crabtree, they married on November 29th 1780 in Cape Elizabeth. Agreen was an aggressive and colorful privateer during the Revoutionary War  and was owner and commander of a schooner named “Harlequin”. He was an early settler and organizer of Bowdoinham. In 1763 he  moved to Hancock, Maine, in 1764 he became a veteran of the Revolutionary War as a licensed privateer or pirate and purchased Ide’s Point and Island in 1768. Many of these people had several children, some of whom married on into other families in other states, and some whom died young due to illness. Overall, the Thrasher cemetary is a very historical and is the oldest cementary in South Portland. Its a reminder of how tough life was back then, and is a symbol of remembrance.

If your interested in visiting and learning more about the Old Setter’s Cemetary, visit the South Portland Histoical Society’s website and check out the cemetery, located on Southern Maine Community College’s campus near Willard Beach.