Up until recently, Twitter has  used a blue checkmark system to indicate “active, notable, and authentic” accounts. This system has been repackaged as Twitter Blue following Elon Musk’s purchase of Twitter– the new system allows users to pay to have a blue verification check mark next to their name. Accounts that receive the new blue checkmark will not undergo review to confirm that they are active, notable, and authentic.”  This has allowed users to reach further than ever before. Some users have been using this feature to create parody accounts of larger accounts. Some of these users are strategically taking the name of other accounts such as Chiquita or Eli Lily. Once they assume the name and create a Twitter handle close to that of the company or a real individual,, they also change the profile picture to that of the targeted person/company. These users have been posting and sending out tweets, acting as these accounts. 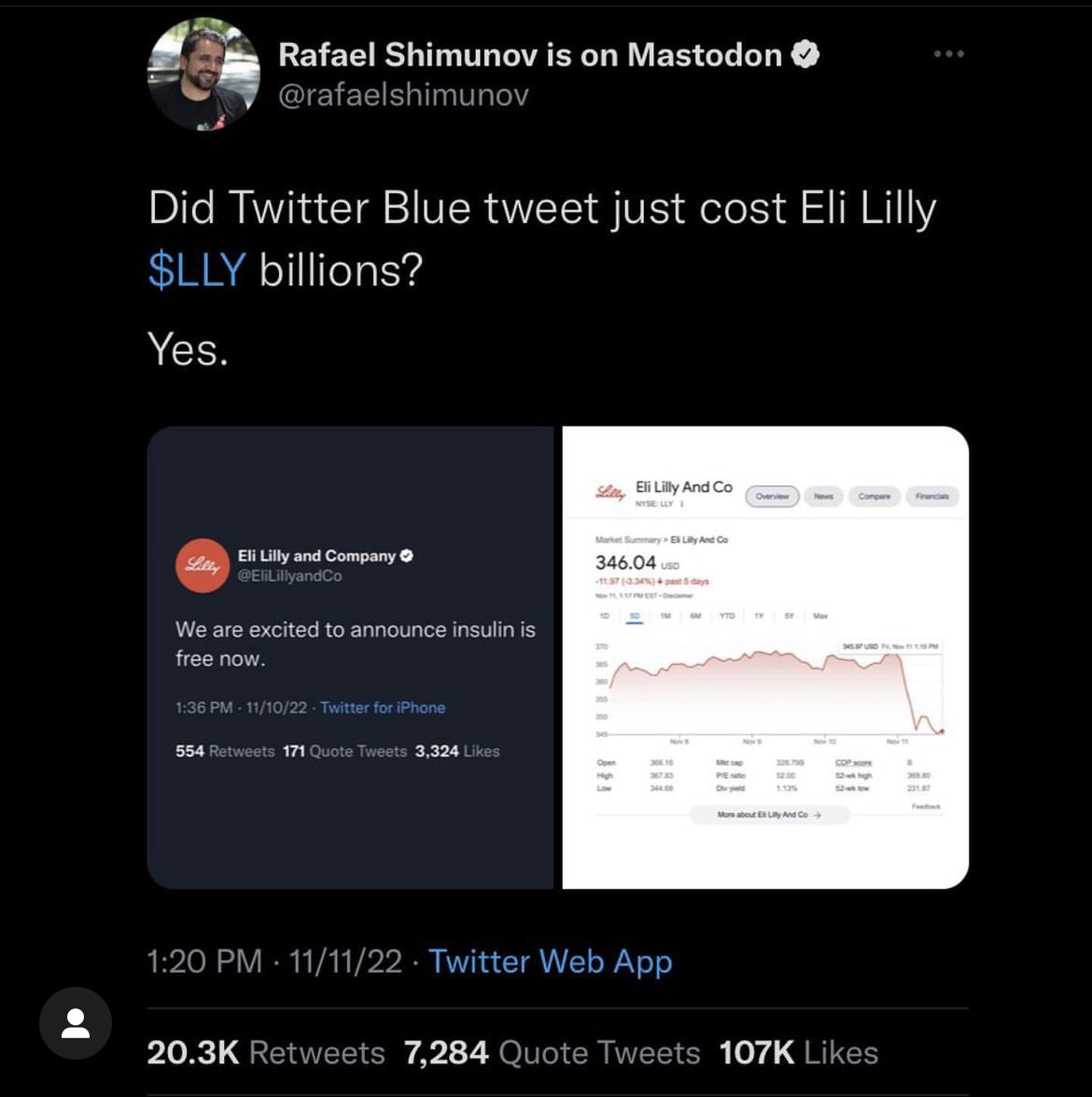 Image from Rafael Shimunov on Twitter.com

Those posts didn’t come without effect. The most notable fallout of these was seen when one user paid $7.99 to get the verification mark next to the handle of their account which assumed the identity of pharmaceutical company Eli Lilly. The tweet under the handle @EliLillyandCO read, “We are excited to announce insulin is free now.” Following this tweet the real account, @LillyPad, Tweeted “We apologize to those who have been served a misleading message from a fake Lilly account.” This chain of events caused the company stock LLY to plummet, falling from $368 per share to $348 per share, a decrease of almost 5%. While that percent may not sound like much, at this scale it cost the company millions of dollars within a matter of minutes. In the wake of these events, a social media storm erupted over the fact Eli Lilly’s company stock crashed following promising free insulin. Given the company’s recent controversy over insulin prices, the internet weighed in on the fact that it is counterintuitive that medical stocks crash when something is done to help the general public–in this case–distribute free insulin.

The fake tweets have impacted Twitter as well. After Eli Lilly was targeted by these parody accounts the company has made the decision to pull advertising from Twitter. They are not the only ones to do so, many other companies have decided to pull advertising from Twitter in an effort to prevent their own accounts from suffering the same fate as Eli Lilly. According to the Wall Street Journal, “By Friday morning, Eli Lilly executives had ordered a halt to all Twitter ad campaigns — a potentially serious blow, given that the $330 billion company controls the kind of massive advertising budget that Musk says the company needs to avoid bankruptcy. They also paused their Twitter publishing plan for all corporate accounts around the world.”

Twitter Blue may be raising $8 per month from end users, however it is seemingly costing Twitter millions of dollars in ad revenue due to companies pulling out of the platform. This response from companies has led Elon Musk to halt Twitter Blue altogether. Twitter announced that until the parody accounts can be monitored and controlled in a way that will not be damaging to Twitter or its advertisers, the service will be placed on an indefinite hold. Twitter blue has however returned to some users such as major corporations, but accounts such as celebrities have not received their “official” labels back yet.